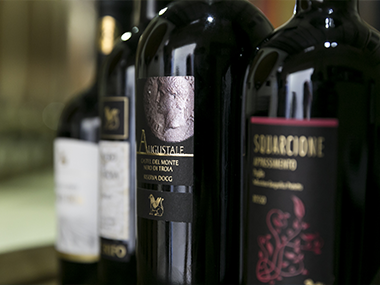 Puglia has at least four important and large wine-growing areas, that extend from north to south of its about 900 kilometers, from the Ionian Sea to the Adriatic: the Capitanata area, Central Murgia, Valle d’Itria and Salento. In two of the abovementioned macro-areas the undisputed king of the vines is Nero di Troia.

You bump into these zones as soon as you set foot in Apulia, arriving from the North. The Capitanata area is the first area you run into arriving from Molise.

Formerly called Daunia, the area corresponds to the current province of Foggia.

The denominations are ancient San Severo DOP and Tavoliere delle Puglie, which has been added more recently. San Severo DOP was the first denomination in Puglia, introduced in April 1968 and followed shortly after by Martina Franca DOP and Locorotondo DOP, both dating back to June 1969.

It is easy to deduce that San Severo DOP gets its name from the most central city of the wine area in question. The wines that are produced in Capitanata are red, rosé or white.

Red and rosè wines are made from the Nero di Troia, which is the autochthonous vine, and the cultivar Montepulciano and Sangiovese. White wines are made from Bombino Bianco, widely cultivated in the South of Italy, whose origins are Spanish, therefore it is not properly autochthonous, along with Trebbiano. Both are among the most cultivated white grape varieties in the area. While, further south, the only autochthonous white grape of Apulia is the Verdeca.

Although the San Severo Bianco is a DOP, in this area the red wine is the master. In particular Nero di Troia, called in ancient times and locally “sumarello”, gives birth to excellent red and rosè wines, now increasingly single variety. Nero di Troia is the third native grape variety of APulia by importance and production, after Primitivo and Negroamaro.

In the area of Capitanata Nero di Troia is also used for interesting blends. For example, together with Montepulciano, Sangiovese and other white berried grapes it gives life to the tasty Cacc’e Mmitte of Lucera DOC.

Further down, here is the Central Murgia, one of the most suited to viticulture areas in Apulia.

Today more than ever the whole area launch herself towards high quality productions. Where once the vines were cultivated and harvested intensively, for some years everything has been focused, from cultivation to production, on the quality that gives the final product structure, complexity and longevity. The area is dominated by the native Nero di Troia vines, followed by Aglianico ones. The winemaking of these grapes is single-variety but they may be embellished with other varieties to produce great blends: examples are some of the top wines of Crifo, the brand of the ancient wine cooperative of Ruvo di Puglia.

The most successful commercial line is called Grifone: a perfect synthesis of the philosophy behind the Ruvo di Puglia winery. Nero di Troia 100% for Grifone Nero di Troia Puglia IGP, while Grifone Castel del Monte DOP red wine is a blend with a quantity of Montepulciano that may vary depending on the vintage.

But Murgia is not only Nero di Troia: this area is also enriched by the grapes of the Bombino Nero variety, as well as Aglianico and Montepulciano whereas, among the white berried grape varieties, there are Bombino Bianco, Pampanuto, Greco, Fiano and white Malvasia.

In the coastal area the autochthonous vine is Moscato Bianco, an excellence from which Moscato di Trani DOP is made, a dessert wine which represents the flagship for most of the local wine companies.

In this area there is also the Moscatello Selvatico grape variety, that can be harvested late as Cantina di Ruvo di Puglia does: the harvest takes place even in the first decade of November. From this particular technique derives the label Crifo Moscatello Selvatico Vendemmia Tardiva Puglia IGP.