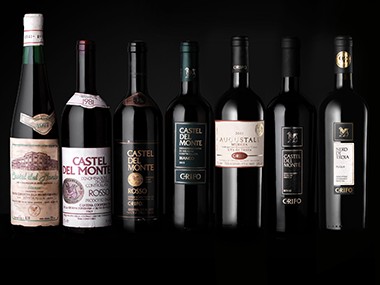 Castel del Monte is the octagonal Federician fortress located in Apulia and UNESCO World Heritage Site since 1996. It also gives its name to three of the four regional DOCG: two for the undisputed Nero di Troia, one for the Bombino Nero.

Nero di Troia is the third most important grape in Puglia, after Primitivo and Negramaro.

In fact, the fourth Apulian DOCG goes to the Primitivo di Manduria Dolce Naturale of the provinces of Taranto and Brindisi.

The DOCG Castel del Monte Nero di Troia Riserva (Aged Red Wine) is related to the cultivation area in the “Central Murgia”. The municipalities of reference are Corato, Ruvo di Puglia, Terlizzi, Bitonto, Palo del Colle, Toritto and Binetto, Minervino Murge and, partly, the territory of the municipalities of Andria and Trani.

According to the disciplinary, the production must derive 90% from the reference vine, that is the Nero di Troia grapes. The remaining 10% belongs to other non-aromatic black grape varieties, suitable for cultivation in the region.

It is a wine aged at least for two years, of which at least one in wood, with a color ranging from ruby red to garnet red and characteristic notes, although delicate, of plum, blackberry and cherry but also vanilla and tobacco, cocoa and liquorice given by aging. It is excellent with succulent dishes and red meats.

The denomination Castel del Monte Rosso Riserva DOCG is reserved for wines obtained from Nero di Troia grape variety for a minimum of 65% and other non-aromatic black grape varieties, suitable for cultivation in the region up to a maximum of 35%.

The reference area is the same: from Castel del Monte up to the Natural Park of Alta Murgia and affects the municipalities of Minervino Murge, part of Andria, Corato, Trani, Ruvo, Terlizzi, Bitonto, Palo del Colle and Toritto and the administrative island D’Ameli of the municipality of Binetto. Even this DOCG wines, before being released for consumption, must undergo an aging of at least two years, of which at least one in wood.

It has an intense and deep ruby red, with the typical scent of plum and blackberry, to which the aging gives spicy notes of liquorice and balsamic. Thanks to the great structure and important tannins it is impeccable on succulent meat dishes.

Meanwhile, the DOCG Castel del Monte Bombino Nero is made from black Bombino grapes for a minimum of 90% and other non-aromatic black berried grapes for a maximum of 10%. The grapes are vinified in rosè color. The cerasuolo pink color wine is quite consistent and structured. Its hints of strawberry and raspberry give elegance but also a wide matching ability.

Castel del Monte Bombino Nero DOCG, as well as taking its name from the Federician fortress and extending its vineyards in the surrounding area, extends to the Natural Park of Alta Murgia. Its production area is between the provinces of Bari and Barletta-Andria-Trani. The municipalities within which it is produced are Minervino Murge, Andria, Corato, Trani, Ruvo, Terlizzi, Bitonto, Palo del Colle and Toritto as well as the administrative island D’Ameli of the municipality of Binetto.