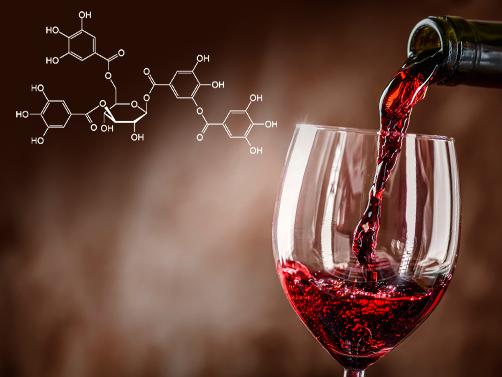 After talking about the characteristics of tannic wines (www.crifo.it/blog/se-dici-vino-tannico-dici-nero-di-troia/) , we go on a journey along the Bel Paese in search of those which, from north to south, passing through the center, are considered the best tannic wines in Italy.

As mentioned, tannins are mainly found in red wines, less in rosè and sweet wines and almost completely absent in white ones.

Tannic wines of Italy: Barolo in the north

Starting from Piedmont, the land of Savoy renowned for the Langhe area, among the tannic wines of Italy we find Barolo, a wine with a Denomination of Controlled and Guaranteed Origin.

Also known as the King of Wines and the King’s Wine, it is among the most appreciated red ones in Italy and known internationally. The strong point of the  region, it boasts a history that dates back to 1600, thanks to the Savoy family who loved Nebbiolo, the grape variety that gives life to Barolo.

The appellation “King of Wines” was introduced later in 1800, when Camillo Benso Conte di Cavour introduced the form of vinification that made the wine as we know it today which at that time was considered innovative. The first awards for Barolo were not long in coming, so much so that in 1873, at the Vienna Competition, both its ability to adapt to aging and its organoleptic qualities were confirmed.

Perhaps other reasons are needed to convince you to taste one of the best tannic wines of Italy, made in the province of Cuneo, in the territories of Barolo, Serralunga d’Alba, Castiglione Falletto and in part the territories of Monforte d’Alba, La Morra, Novello and Grinzane Cavour?

Tannic wines of Italy: in the centre, Brunello di Montalcino

Moving towards the center of the peninsula, in Dante’s land, we find Brunello di Montalcino, considered, together with Barolo, the Italian red wine with the greatest longevity.

Produced in the province of Siena, in the town of Montalcino from which it takes its name, it is undoubtedly the most famous Tuscan wine in the world, perhaps for its intense and persistent perfume and for its unmistakable intense ruby red color.

It was mid-nineteenth century when Clemente Santi, pharmacist and renowned author in the field of natural sciences, began to experiment with the production of a red wine (Brunello) for which, in 1865, he won two silver medals. Soon other local families began to produce the same wine, obtaining prestigious national and international recognition.

Despite this, it continued to be produced in limited quantities, and only after the Second World War, around 1950, Brunello managed to achieve such fame that it obtained the Denomination of Controlled and Guaranteed Origin, confirming itself as one of the best tannic wines of Italy.

The Brunello history is very singular, since until the end of 1800, was thought to derive from a homonymous variety of local grapes. Only when the Ampelographic Commission of the Province of Siena, after years of controls, in 1879 decreed that Brunello and Sangiovese were the same variety of grapes, it was made known that Brunello wine is produced from Sangiovese grapes.

Tannic wines of Italy: in the south, the Nero di Troia

In the triad of the best tannic wines of Italy, finally reaching the lands of the south, we find the majestic Nero di Troia (https://www.crifo.it/blog/nero-di-troia-sapori-in-bilico-tra-leggenda-e-realta/), considered the best red wine of Puglia.

It is the third autochthonous grape of the region https://www.crifo.it/en/blog/best-wines-of-puglia-nero-di-troia-in-addition-to-primitivo-and-negromaro/), also known as the king of the vines of northern Puglia. Although the name suggests more origin from the city of Troy, this vineyard, among the oldest and most characteristic of the region, is between the provinces of Bari, Andria and Trani (the so-called BAT), covering the area of Foggia and Gargano, down to Castel del Monte. Its origins, however, lend themselves to several assumptions: it may have arrived in ancient times from Greece or it may have been brought from Galicia, considering the Spanish domination suffered in the past by southern Italy.

More than its origin, however, it is curious to know of its etymology: the term Nero di Troia (https://www.crifo.it/en/blog/nero-di-troia-grapes-wine-making/) derives from its high polyphenolic charge (that is tannins) which gives the wine that intense color tending to black. Despite this unique feature, the author of an enviable history that dates back to 1200 BC, the potential of this vineyard has not always been appreciated in past centuries.

Nevertheless, the result is one of the best tannic wines in Italy with Protected Geographical Indication, the wine Nero di Troia (https://www.crifo.it/en/product/augustale-castel-del-monte-nero-di-troia-riserva-docg/). And if Barolo is said to be the Wine of the Kings, this, without a doubt, is the Gods’ wine.